Two Yosemites: An Outdoor Opera coming to a National Park near you

I recently completed the first act of my most ambitious project to date, Two Yosemites: An Environmental Chamber Opera. This project has sustained years of ideas and passions, Two Yosemites seeks to culminate history, conservation, music, drama and myth. The opera explores a pivotal moment in the history of the American environmental movement when two protean figures made a powerful alliance on the behalf of nature, also illuminating the fault lines of a society in increasing conflict with its environment.

I believe we are at a crucial moment where the arts may lead the way in creating a ‘culture of communion’ with the natural world – creating opportunities for our culture to find renewed harmony within the web of life. Collaborating with Muir scholar and actor Lee Stetson (featured on the PBS special The National Parks) I’ve adapted the libretto from his play, including numerous primary sources of Roosevelt and Muir as well as written accounts of their trip together. Though many anecdotes are historically verified, there is no way to know exactly what they said to one another–leaving room for art and myth to take over where history leaves off.

I interpret this story as a mythological quest; Roosevelt, the hero, departs for the wilderness, choosing John Muir as his ‘shaman’ or spiritual guide. Roosevelt undergoes a spiritual transformation with Muir. After meeting Muir his Presidential speeches and policy reflected this change, leaving a legacy of over twenty National Parks and Monuments – a Presidential record of conservation that has still yet to be matched. Roosevelt and Muir’s odyssey of departure-transformation-return leaves fertile ground for opera – a genre, which at its best, concerns itself with myth and the exploration of momentous questions. Contemporary operas also seek to reimagine its audience and function in contemporary society. 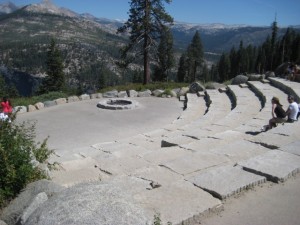 My vision for Two Yosemites has always been to stage the opera outdoors, at Glacier Point where Muir and Roosevelt actually camped and talked late into the night around the fire. Giving audiences and visitors an opportunity to have an historical and aesthetic experience with direct links to our past, present, and future relationship with nature. The amphitheater at Glacier Point is the perfect place for this story to come alive, providing audiences with an opportunity to reflect on their own transformation of consciousness.

We are currently collaborating with environmental organizations, the National Park Service, as well as individuals, singers, musicians to make this vision a reality.

The premiere performance, staged on the rooftop terrace of the San Francisco Conservatory of Music, may be viewed on the Music page of this website. 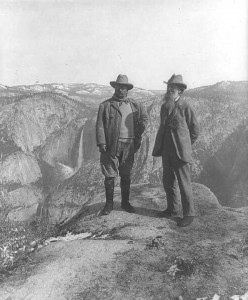 President Theodore Roosevelt and John Muir begin their second night camping together in Yosemite. The prologue begins with the hushed evening soundscape of Glacier Point, towering three thousand feet above Yosemite Valley, hermit thrushes (depicted by the piccolo and violins) serenade the scene. An emblematic horn solo segues Roosevelt’s declamation of the natural beauty of Yosemite and enthusiasm for being in the ‘western wilds’ with Muir. Muir shows Roosevelt a letter from their mutual friend and acquaintance, Charles Sargent, whom requests an introduction from the President to help Muir’s travels on his upcoming ‘round-the-world-journey’ (which he postponed for Roosevelt). Roosevelt reads the letter, accidentally finding some choice, critical words about himself, or rather about his friend and recently appointed Chief of Forestry, Gifford Pinchot. Though a friend of the President and a friend to the “practical” interests of conservation (i.e. timber and mining companies), Muir perceives Pinchot (and by association Roosevelt) as no friend of the forest and though apologetic at first, recedes into an impassioned diatribe–giving the President of the United States a talking-to. Roosevelt, alarmed and dismissive, squeezes in words when he can in a tense argument/duet. The two men do anything but listen to each other, hardly noticing the chorus of Yosemite (tonight depicted by our two lovely sopranos and ensemble) making hints to them to perhaps settle down and listen to the wilds.

The issue of preserving the giant trees of Yosemite and protecting the Valley as part of the National Park (in 1903 it was still controlled by the State of California) are foremost on Muir’s mind while Roosevelt speechifies on compromise. Muir eventually gets the last word, remarking to the President that “God has saved these trees from the wraths of time, but he cannot save them from fools–only Uncle Sam can do that.” For his part, Roosevelt finds a momentary pause from Muir’s assault as the hermit thrushes return (Roosevelt was an amateur ornithologist and avid naturalist).

The thrush leads the two men away from themselves and back into the wilderness. Roosevelt chides Muir a little by stating he ‘should listen more to avian music’ and quotes Walt Whitman in an offhand reference to Muir before descending into a political overture of his own (Roosevelt’s aria), mixing metaphors and remarking that ‘progress, the impulse of civilization, must find its way amid the trees.’

The music changes course into a brief interlude as the two men, in an impasse, pause for a moment in contemplation. Roosevelt’s very political response prompts Muir into a ‘story’ of two Yosemites, specifically the beautiful Hetch Hetchy Valley (Muir’s aria), Yosemite’s ‘little sister to the north’ which is under threat of being confiscated and dammed by the city of San Francisco (with help from Pinchot’s political muscle, of course). Muir’s story morphs from past to present tense, describing for Roosevelt a potentially disastrous future. The first act of the opera ends with Muir, making a plea to mankind to return to the ‘waters and the wild’ and to listen once again.