Justin Ralls, composer and conductor, hails from the Pacific Northwest and is inspired by the beauty of the natural world and our ‘elemental imagination.’ Ralls has conducted his works at the Hydansaal in Eisenstadt, Austria, the Lucca International Youth Orchestra Festival in Albano Terme, Italy, Oregon Bach Festival, Fairbanks Summer Arts Festival, Britt Festival at Crater Lake National Park, the Newman Scoring Stage in Los Angeles, Arlene Schnitzer Concert Hall in Portland, as well as venues in Salzburg, Rome, Portland, Fairbanks, Boston, San Francisco and beyond. Ralls’ work has been described as “a beautifully textured, lush evocation of John Muir’s Yosemite that was full of color and light” (Daily Gazette, NY), “a gifted melodist…a beautiful blend of natural and human-made music” (Artslandia), and “a whirlwind of thick orchestral textures…definitely establishing his own voice…” (SF Examiner). Ralls’ Tree Ride won the 2013 Highsmith Award for orchestra and received Special Distinction in the 2014 ASCAP Rudolf Nissim Prize as well as winning Third Place in the 2017-18 American Prize. Tree Ride was featured on the 2014 Fairbanks Summer Arts Festival in Fairbanks, Alaska conducted by Robert Franz. Tree Ride was also featured on Albany Symphony’s 2015 Composer-to-Center-Stage as well as their 2017 American Music Festival, conducted by David Alan Miller. John Adams spoke of Tree Ride as “impressive…showing a mastery of orchestral technique,” also stating “your analogy to natural forces was done very well, your thunderstorm basically better than the Pastoral.” 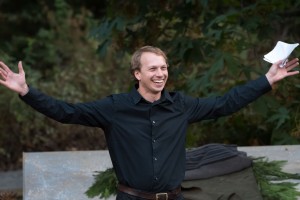 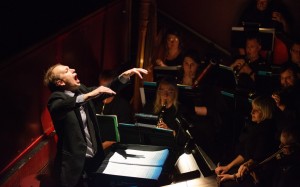 He steadfastly believes in the transformative and communal power of music to bring ideas and communities together, whether between human communities or between humans and the natural world. In 2017 Opera Theater Oregon produced the world premiere of Ralls’ chamber opera, Two Yosemites: An Environmental Opera, setting the 1903 meeting of John Muir and Theodore Roosevelt, featuring tenor Aaron Short and baritone Nicholas Meyer – “Ralls took this thematic coloring to the next level, in the finest operatic tradition,” (Oregon Arts Watch).

Recent projects include a 2018 commission from pianist Hunter Noack’s In a Landscape series of outdoor solo piano concerts in wild spaces and public lands throughout Oregon as well as arrangements of WW1 popular songs for OTO’s 2019 production WW1: A Song-Opera of Remembrance.  Most recently, in response to COVID-19 Ralls, in collaboration with OTO and Portland Opera, composed and arranged songs for clarinet and mezzo-soprano, Camille Sherman, including the popular 1919 song The World is Waiting for the Sunrise. Eugene Opera will feature Ralls’ Three Songs on their “Songs of Quarantine” virtual series in Spring, 2021.

Ralls’ education includes a Bachelor of Music in Composition from The Boston Conservatory where he studied with Dalit Warshaw, Andy Vores, Jan Swafford, and a Master of Music from the San Francisco Conservatory under the tutelage of Dan Becker and David Conte. In March, 2020 he successfully defended his Ph.D. in Music Composition at the University of Oregon where he has taught composition as well as studying with composers Robert Kyr and David Crumb, with additional research in Nature, New Media, and Indigenous Thought. His doctoral dissertation, a three-act eco-fairy tale opera Song of the Most Beautiful Bird of the Forest is a synthesis of dance, music, and story, influenced by recent scholarship in eco-musicology. In the Spring of 2020 Ralls joined the faculty at Linfield University as an Adjunct Professor of Music. Ralls enjoys the outdoors, hiking, backpacking, birdwatching and reading the works of John Muir and Joseph Campbell.