From Orchestra to Organ

My new work for organ will be premiered Sunday, April 26, 2015 at the First Presbyterian Church of Oakland by organist Jason Jia.

I am well on the way to completing my first piece for organ, and not just any organ but a Rosales organ. The Rosales organ is an amazing, awe inspiring feat of engineering, vision, and the mysticism of sound. It is a complex, nuanced instrument and I’d be lying if I said this has not been a considerable challenge both technically and conceptually. For one, the organ is not a keyboard instrument – it speaks through giant pipes of air – it has a ‘keyboard,’ true, but the slight delay of the keyboard mechanism is a constant reminder you’re not at the piano but at the input of a giant, exhaling machine. I would equate the organ more to a choir of winds or voices, the caveat being that the instrument doesn’t have to breathe!

At last summer’s 2014 Oregon Bach Festival Composers Symposium I had the pleasure of presenting my orchestral work, Tree Ride, to composer Chen Yi and a small focal group of other composer/performers. Among them was the accomplished composer Dr. Cyril Deaconoff, organist and music director of the First Church of Oakland. Having completed my masters at the San Francisco Conservatory of Music, we discussed my interest in the natural and cultural history of the Bay Area and we instantly began discussions about a piece for the spectacular Rosales Op. 16 organ. The commission will be part of a new series he is launching called Arts Under the Spire (AUTS), aimed at championing new works and new audiences for organ music. 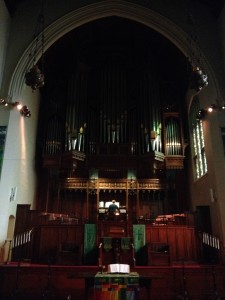 The composer getting in touch with the spirit of the Rosales organ. Photo by Anne Polyakov.

The commission will also celebrate the 100th anniversary of the current neo-gothic building which was completed in  1914. I was captivated instantly by the diversity of the congregation (which is the oldest church in the East Bay, formed in 1853). While devouring organ music from medieval times to the present  my inspiration and curiosity has been specifically peaked by the versatility and creative power of the French symphonic Rosales organ itself, notably the different ‘orchestral’ colors and sound worlds this instrument can evoke. Despite the infinite variety of colors and no restriction on sustain, the organist does only have ten fingers, two hands, and two feet. Yet, sitting down at the organ and improvising, looking where to place my feet – it felt like a natural extension of the body and akin to my experience playing jazz drums. And though the drums are notorious for accessories and gear, it doesn’t come close to the specs of the Rosales:

While sitting in the loft it is hard to fathom there are nearly 20 tons of instrument at your fingertips and what is also interesting is that the best sound isn’t necessarily at the organ itself. The scale of the organ is epic and the specifications relay as much: Great, Positive, Swell. With their many registrations: 2 Super Octave, 16 Bombarde, 8 Vox Humana, 3 1/5 Grosse Tierce etc.

It is like steering a huge ship of some kind, however when composing or playing the organ the secrets of the instrument are revealed: the real vessel is you.